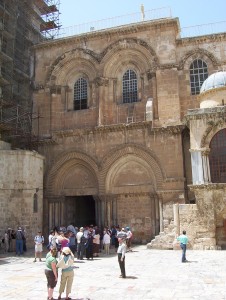 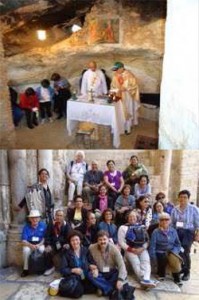 The pilgrimage to the Holy Land with Robert Lebel, author priest-songwriter was a great success! The forty pilgrims who took part in the trip were delighted! This tour was organized in collaboration with Salt & Light Television and a portion of the proceeds helped support the Salt and Light Catholic Media Foundation, a nonprofit organization focused on telling stories of hope and inspiration that bring people closer to Christ.
There will be another pilgrimage to Poland this time with Robert Lebel in collaboration with Salt and Light Television in September 2015.
Tags: Holy land, Jerusalem, Nazareth, pilgrimage, pilgrimage to the Holy Land, Spiritours
off

At 82 years old, Father Marier comes back overwhelmed from Compostela 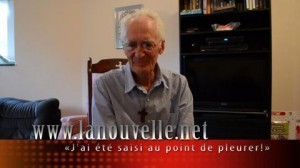 Never did Father Gérard Marier think that he would ever claim to be so “proud” of himself. And for good reason! At 82 years old, he just arrived… still as upright, from a long 300 kilometre walk on the rocky road of Compostela. “In my life, I’ve learned a great deal from books. I did not think you could learn as much from walking, from the movement that is so simple and repetitive of your feet!” he said.

On August 31st, he left with a group from Spiritours, he walked for three weeks, at a rate of at least twenty kilometres per day, from Burgos in Spain up to the Cathedral of Santiago.

On the last day of his pilgrimage, on September 19th, at the end of a long 6 hour walk, Father Marier said that he cried in front of the Cathedral. So overwhelmed by gratitude was he.

“I’ve accomplished something by the grace of God”, he said. Throughout the hike, Father  Marier, sometimes apart from the group, prayed to God. Asking Him for the spirit, strength, and energy needed to walk up and down or move forward on the plains of the rocky road.

We can expect him to, as we know him, devote himself to writing about the story of this pilgrimage, so much was he overcome. “I feel like, in September, I switched over from fall to summer. As if all my inner landscape had changed.”

Tags: Camino, Compostela, Santiago de Compostela, the way of beauty, The way of St. James, way of st. James
off 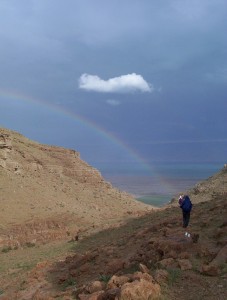