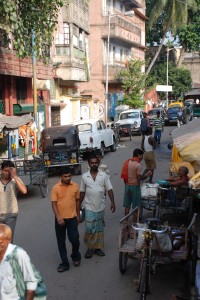 From each perspective, from one article to another, India can be seen or presented in many different ways. In fact, there are so many “Indias”, that each visitor is shaped by their own personal experience.

This Haiku entry is seen as an example. India that is at the same time both wonderous and loud … the very same sound. Does this mean that there is no silence? No, but it is rare … it needs to be savored and sometimes cultivated.

For anyone who steps there for the first time will surely be in « Ahh » with joy after such a long flight. And just as quickly followed by an « Ahhh! » of happiness in comfort from the heat … then to another « Ahhhhhh! » assured by the transportation (which is air conditioned) to the accommodation.

In a first release, there will be plenty of « Oh, » before the new, the unusual front, before the unexpected, before the commotion, before the overload of information and stimulation as well as constant contact, caused by the overcrowding.

Then the first real communication efforts, there will be those « »Huh? » » moments that the ear will instinctively focus on this Hindu-British (or British-Bengali) accent. Usually the universal decoder based brain adjusts to the third day …Tika[i] !